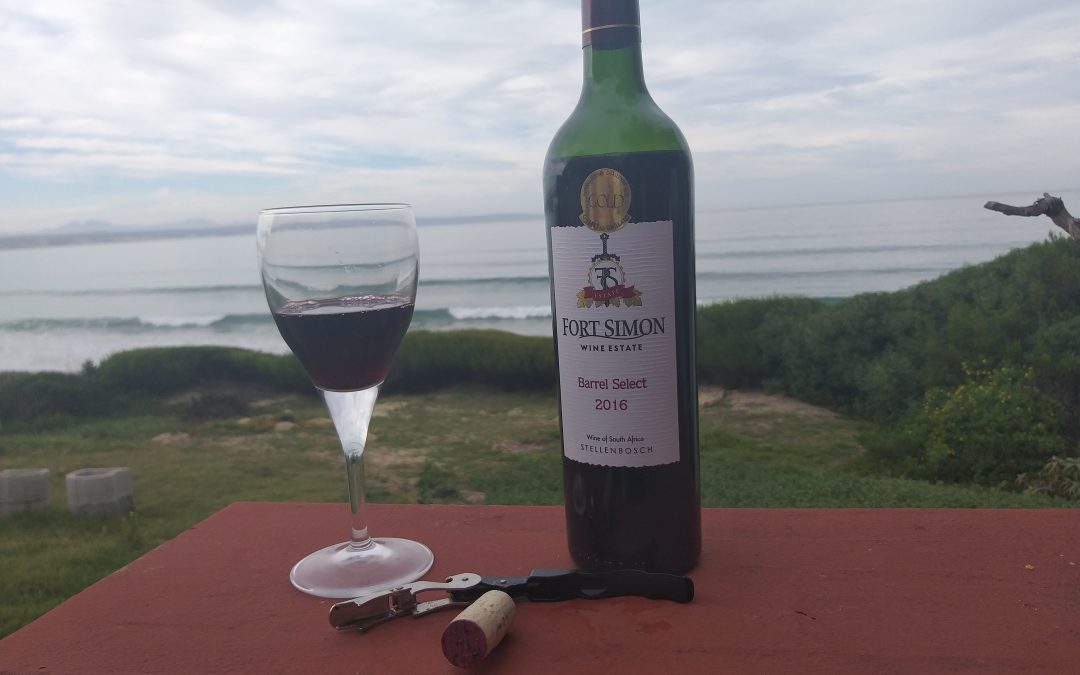 Golden Cape Tours recently hosted a keen surfer who was interested in exploring the Southern Cape coast, with knowledgeable and experienced surfers and a surf coach. The experience was a combination of surfing and enjoying good wine which was facilitated by myself, a wine professional and tour guide and Richard Myburgh, the owner of R.M.S. Surf school.

The tour started from Cape Town and headed off to the Still Baai area for a surf check. Unfortunately though the conditions were perfect, due to the impending storm, there was very little swell which was unusual for this time of the year.

We overnighted at Vleesbaai and had our traditional ice breaker braaivleis (barbeque) with a lovely selection of craft beers and followed by 2 memorable Fort Simon wines. We usually enjoy a tasting of gins and liquers at Inverroche, however we decided to make an early start to the serious task of lighting a fire.

The next morning was a quick pack up and departure for Jeffreys Bay as the predicted cold front was clearly on it’s way. We did however have time for brunch in Wilderness followed by a great stop at the Oak barrel, a quaint wine shoppe at Timberlake. There was also time for a browse at the car dealer in Sedgefield that specializes in rare old cars. This is not a museum, but rather a place where one could purchase iconic old cars cleverly supported by a spares shop. There were a number of cars that brought back great memories and invoked much drooling, with the promise of the fabled lottery winning ticket resulting a return to purchase the dream surf vehicle.

Next up was Buffelsbaai to see if the swell had arrived. Though it clearly was picking up, so was the wind and we could see serious rain on the way. It was a lovely drive through the lake districts and into the Tsitsikamma where we contemplated a bungie jump of Bloukrans bridge. Sadly the rain started and we were forced to push on.

Upon arrival at Jeffreys Bay, there was a clear buzz in the air as the strong swell was anticipated. As is tradition, immediately after checking into our beach front accommodation, we took a short walk to the famous Supertubes surf break to check out the waves. The iconic boardwalk is the ideal place to crack a beer or enjoy a glass of wine while watching the international and local surfers strive for the perfect wave.

Due to the close proximity to the top notch Spar and other stores, we were happy to walk to most spots. The Nina’s deli and eatery has a great reputation for good value and excellent food and their lasagna and pasta dishes became a firm favorite. The Fort Simon Cabernet Sauvignon was a great partner to the meal.

The sun rises in the East and the boardwalk is a perfect place to watch the sun come up. We were also blessed with an exhibition of dolphins frolicking less than 75 meters offshore for over an hour. Our guest was stoked as it was his first sighting of these magnificent creatures. The surf was smaller than expected and it was a great opportunity to visit Cape St Francis and to surf Seal Point and to admire the fabled Bruces Beauties line up as immortalized by Bruce Brown in the breakout surf movie Endless Summer. We also contemplated a beer tasting at St Francis brewery but decided to head back for a late afternoon surf at The Point.

The swell had arrived and though it was smaller than predicted, it allowed us the opportunity to surf a variety of spots which included Kitchen Windows which is great for progressing surfers, Albatrosses for un-crowded fun waves, The point for long boarding or Tubes for quicker hollow waves. Supertubes was not ideal so we did not sample this excellent wave as there was a number of other options and our guest was not ready for this technical wave.

The small town has a solid crew of great surfers and surf industry related icons. It was therefore a treat to invite Mike Meyer, a well-respected surfer and master shaper to a braai in his honor. Many great stories were told of times past and the characters of the past decades. Surfboard progression was a huge topic and we were invited to visit Mike’s factory to see first – hand how surfboards are created by master craftsmen such as Mike who does everything himself! (except the blanks of course)

Our guest was advised on the best board for his skillset and he plans to order a board shortly based on Mike’s recommendation. It goes without saying that Mike and his wife Kim enjoyed the selection of wines including the Fort Simon Pinotage, the barrel select and the Cabernet Sauvignon.

The next morning was another fun surf which allowed our guest to become more used to the point break conditions and the skill of entering and exiting the rocky shelf. The weather was sublime with the water a pleasant 18* and the day temperature between 20 and 25 * throughout.

Our guest was also thrilled to be coached on the finer points of surfing The Point as well as swopping boards with Bruce Gold for a couple of waves who is yet another Jeffreys Bay legend.

The abundance of surf shops in the town allows one to seek out some bargains in the various factory store outlets which are considerably cheaper than in the high street stores. It is therefore essential to spend some time trawling the racks. I personally prefer O’Neill and Ripcurl, however Billabong also have some great products. One of my favourite stores is Country Feeling which stocks Firewire and PYZEL boards amongst others, that has plenty of style and some memorabilia of the past surf pioneers such as Cheron Kraak. There is also a surf museum which we did not get time to visit due to surfing.

Due to pressing commitments for all, we decided to head homeward on Friday and stop off at Bramon, a boutique winery in Plettenberg Bay. We were blessed to be treated to a tasting in the vineyards, followed by a cellar tour and a further tasting by the winemaker extraordinaire, Anton Smal who is another surfing legend of the area. The highlight for all was doing a tank tasting of the wines from this up and coming cool wine region as Anton vinifies wine for all the local producers.

We decided to overnight in Plett and hit the road early for a planned surf at Mossel Bay followed by a wine tasting at Jakkalsvlei. Sadly we were derailed by a memorable stop at The Slow Market at Sedgefield where a myriad of healthy food and interesting product are sold.

Though we had the option of surfing Victoria Bay we pushed on to Mossel Bay for a surf at cooking Inner pool before heading home over Du Toits Kloof for a hazy sunset photo opportunity.

All in all we covered over 2000 km and surfed 6 surf spots. We also did a number of wine/beer tastings as well as enjoying some interesting wines either at our lodgings or at the eateries. We could have crammed in more activities, however this was a surf adventure and we planned accordingly and surfed whenever possible.

The trip was planned around our guest and his requirements as well as surf conditions which can be a challenge if you do not have a consummate knowledge of the areas.

For those who may not be surfers, please be advised that we also do kayak trips to the region which allows a similar program that visits the water bodies of region, depending on skill levels and enthusiasm. Wine and cultural activities are incorporated into the tour. Please feel free to contact me for further details.

Please note that there were additional activities which were not embarked upon or mentioned such as amongst others:

Please note that all the activities, food, wine, accommodation, transport and guiding is included in the cost of a tour. We specialize in small groups of 2 – 6 and will design the perfect experience depending on your interests and preferred activities. As a rough guideline, the cost is R4500 per day all inclusive with a reduction on children below 13. Why not Be My Guest and book a memorable tour now!